The usability scores in your maze report are not intended as an interpretation of the design but as a way to measure the ease of use of the screens, missions, and maze.The usability score is an exact number from 0 to 100. You get a usability score for every screen, mission, and maze.Screen Usability Score (SCUS)You get a usability score for every screen in the expected paths. The score reflects how easy it is for a user to perform a given task (mission) with your prototype. A high usability score indicates the design will be easy to use and intuitive. Principles used to compute the SCUSYou lose usability points when a user:... clicks on another hotspot than the expected ones. This means the user got off the expected path(s), which in a live product results in frustration or a lost user.... gives up on a mission. This is a clear indication something isn't right and should be checked.... misclicks. It's common that in a prototype not every area is clickable, but a misclick in a live product would take the user to an "incorrect" page which leads to (1) above.... spends too much time on a screen. Understandably, there are types of pages in a live product where you'd want the user to spend a lot of time, e.g., on a blog article or on an About us page. But in a prototype, too much time spent on a screen indicates something is wrong and needs to be improved.How these principles are translated into data(1) and (2) are expressed by the drop-off and give up rate. Both are equally as important. For every percent of users dropping off or giving up on a mission, you lose 1 usability point.(3) is expressed by the misclick rate. Not every misclick is an indication of a wrong action so for every percent of a misclick, you lose 0.5 usability points.(4) is expressed by average duration in the following way:- From 0 to 5 seconds: no usability points lost- From 5 to 25 seconds: 1 usability point lost every 2 seconds- From 25 seconds and on: 10 usability points lost 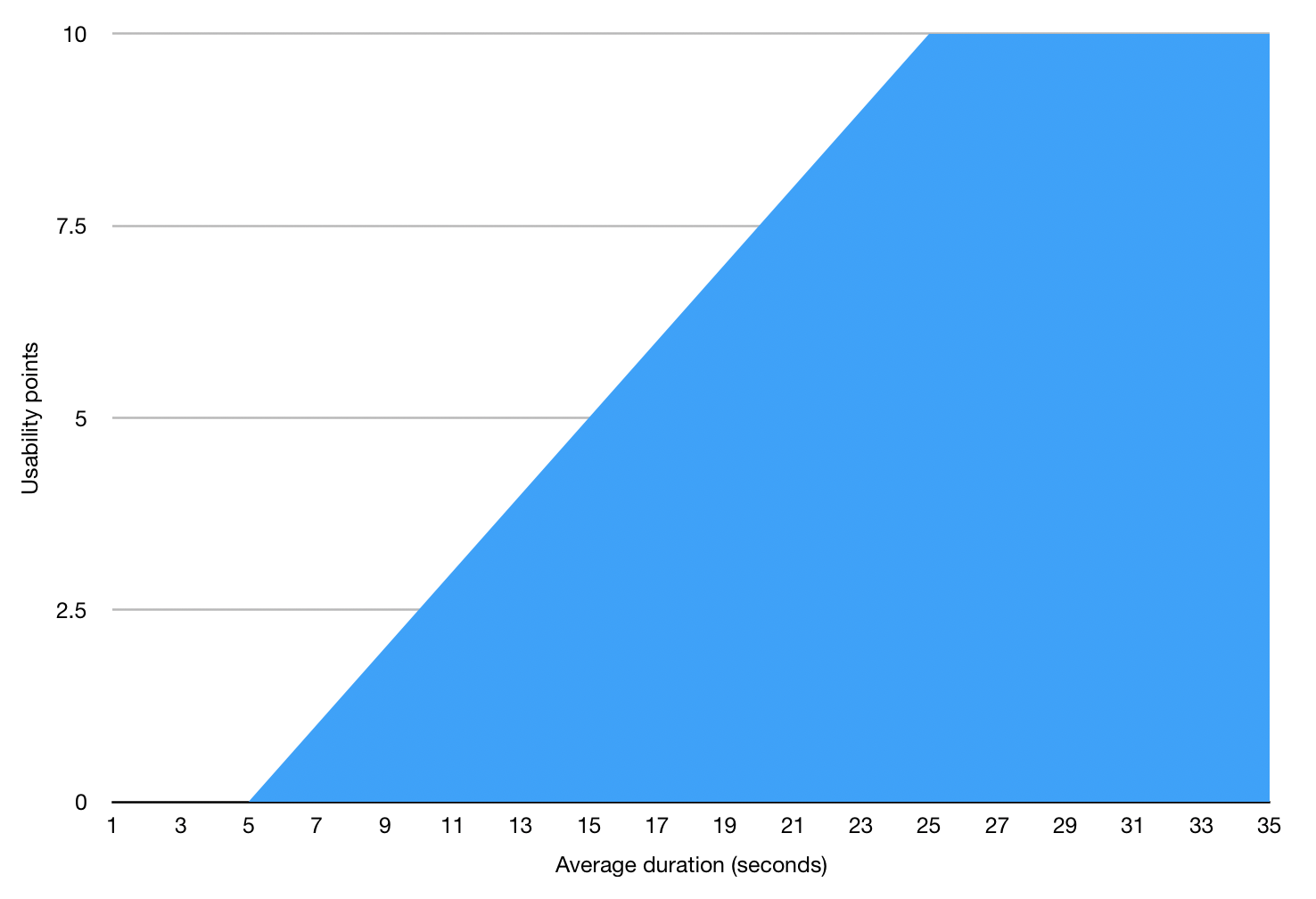 SCUS FormulaSCUS = MAX(0,100 - (DOR* dW) - (MCR*mW) - (MIN(10,MAX(0,(AVGD - 5)/2))))Which has these variables:SCUS for Screen Usability ScoreDOR for drop-off and bounce ratedW for DOR weight; The dW equals 1 point for every drop-off / bounceMCR for misclick ratemW for MCR weight; The mW equals 0.5 points for every misclickAVGD for Average Duration in secondsAnd these functions: MAX: MAX(VALUE, {EXPRESSION}) => return the maximum between the VALUE and the EXPRESSIONMAX: MIN(VALUE, {EXPRESSION}) => return the minimum between the VALUE and the EXPRESSIONMission Usability Score (MIUS)You get a usability score for every mission in your maze. As with the SCUS, the mission score reflects how easy it is for a user to perform a task (mission) with your prototype. A high usability score indicates the finished product will be usable, intuitive, and efficient.Principles used to compute the MIUSThe direct success should have a strongly correlated to the mission usability scoreThe indirect success shouldn't be considered as a failureThe average usability metrics should impact the mission scoreHow these principles are translated into dataFor each percent of direct success rate is equal to 1 point.For each percent of indirect success rate is equal to 0.5 point.The average misclick and duration penalty applied to the screen will be applied to the mission. For instance a mission with a 100% success rate, but an average of 50% misclick rate on every screen will deduce 25 points. So an MCUS of 75 out of 100.MIUS FormulaMIUS = DSR + (IDSR / 2) - avg(MC_P) - avg(DU_P)Which has these variables: DSR for Direct Success RateIDSR for Indirect Success Rateavg for the averageMC_P for misclick penalty = MCR * 0.5DU_P for duration penalty = (MIN(10,MAX(0,(AVGD - 5)/2)))Maze Usability Score (MAUS)You get a Usability Score for every one of your live maze tested. A mission's usability score (MIUS) doesn't have an impact on the other missions' scores. The Maze Usability Score (MAUS) is thus an average of the usability score for every mission in the maze. MAUS FormulaMAUS = avg(MIUS)Which has these variables: MAUS for Maze Usability Scoreavg for the averageMIUS for Mission Usability Score

Was this article helpful?